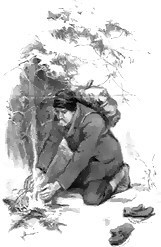 Each of Jack London’s short stories is a valuable lesson about life and natural laws. As said by the French philosopher Jean Jacques Rousseau: “Man is (physically as weak as) a reed, but he is a reed that thinks.” (L’homme n’est qu’un Roseau, mais un Roseau pensant.) The history of humankind is that of persistent struggles for life. Facing the powerful and mysterious nature, men are so tiny, weak and fragile. But thanks to the strength of thoughts and will, men have subdued and controlled nature to exploit its energies to serve the needs that have been more increased. Thoughts help men’s ability to develop and strong will helps men’s strength multiply. Except for the universe of which the mystery we have not discovered yet, anything on earth must have its limit; so are men’s strength and ability.

In his story “To Build a Fire”, Jack London described the failure of a lonely traveler struggling against the tremendous cold since he couldn’t overpass the law of limit.

…[T]o meditate upon his frailty as a creature of temperature, and upon man’s frailty in general, able only to live within certain narrow limit of heat and cold; and from there on, it did not lead him to the conjectural field of immorality and man’s place in the universe.”

The rough character is a man who traveled through the kingdom of snow somewhere in the North Pole. This was his first winter, and he had only a dog to be his companion. He was well equipped with enough materials and a strong will save one thing: “The trouble with him was that he was without imagination.” When the temperature dropped seventy degrees below zero, there was nothing that could help him to survive except the fire. At times, he failed to build a fire because his hands were almost frozen as they were exposed to the cold air. All his extraordinary efforts became helpless. In such a harsh and dangerous situation, he realized that: “a man should travel with a partner.” The second character, if an animal might be so-called, is a big native husky wolf dog. It didn’t have a sharp consciousness as did his master, but it had its brute instinct: “it experienced a vague but menacing apprehension that subdued it…” The dog’s presentiment was much better than that of the man, but the dog must rely on him. “It’s instinct told it a truer tale that was told to the man by the man’s judgment… and that made it question eagerly every unwonted movement of the man as if expecting him to go into camp and to seek shelter somewhere and build a fire.”
As long as the man’s struggle against nature was in process, an internal conflict happened simultaneously within his thoughts. He was really a strong man – physically and spiritually – for he didn’t stop thinking and struggling until the last attempts failed. He surrendered only when he was no longer able to control his arms and legs. The climax of his internal conflict is his level attitude toward the death as he finally learned that he had been defeated: “It was like taking an anesthetic. Freezing was not so bad as people though. There were lots worse ways to die.”
It is deficient if we do not point out another conflict between the man and his dog in which the animal played a passive role. The man wanted to kill the dog to warm his hands; the dog sensed the danger but it did not want to fight against its master. The only thing it could do was to run away from the man.
In another story of his – “Love of Life,” concerning a similar case – London let his protagonist survive after a persistent and desperate resistance. Perhaps in Love of Life, either the condition was less harsh or the man will was much stronger than those in To Build a Fire. We learn that the strong will usually go along with faith; exactly speaking, it is reinforced by faith. “If ye have faith as a grain of mustard seed, ye shall say unto this mountain: remove hence to yonder place; and it shall remove; and nothing shell be impossible unto you.” (Bible, Mathew 17:20)
By using both the omniscient and objective points of view, Jack London didn’t simply tell us the characters’ actions, but also revealed what they though and felt. Thanks to London’s experience as a sailor, a miner, and a traveler, he had the competence to describe thoroughly and exactly step by step the development of each character’s emotions. This helps us to share the joy, the pain and the difficulties the characters endured.