(Short remark by Michael Do at the Human Right Torch Lightening Ceremony at the Texas Capitol at 1:30, Sunday April 20, 2008) 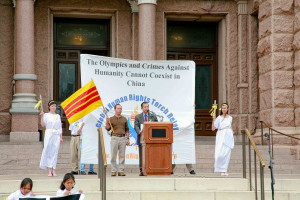 Everyday, as we wake up looking through the window to see the blue sky, how many of us would appreciate the freedom and democracy that along the history of this young nation, thousands of brave men and women have given their lives to struggle for?

Yes indeed, we are the happiest people in this planet. Millions of others are still live in persecution and oppression in scores of countries where the Communism and dictatorship reign.

Everybody is equal. We are born with all rights and dignity until the evil forces take them from us.

Every people have t 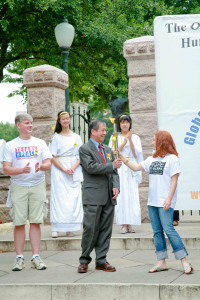 heir right to determine their destiny until the strong people invade and make them slaves.

During its occupation of Tibet from 1949 to present, Communist China always falsely claims that Tibet is its territory as it does to Mongolia, Manchuria, and even to Vietnam.

Over 1.2 million Tibetans have died as a direct result of the Chinese invasion and occupation. Worse, Tibetans are witnessing the extermination of their culture and religion by the Chinese Communists.

Looking back into Vietnam, 33 years after the war ended in 1975, our people still suffer the darkness of Communism. Except for the very small top layer of the rulers, the majority do not have any basic rights such as: the right to life, liberty and security of person.

Without rights and freedom, a man is solely an animal that can speak and work. But speak only the way the rulers direct, and work for the rulers’ profits.

Myanmar and North Korea are no exemption in this case of Human Rights violation.

Since, the people deserve freedom and human rights, we are gathering today to demand the evil governments to render the rights and freedom to the oppressed people.

Mainland Chinese, Vietnamese, Burmese, North Korean must be freed from any kinds of oppression and persecution.

Being here today at this solemn gathering, we would like to express our solidarity to the Chinese, Tibetans, North Korean, Cuban and other people who are enduring the dictatorship.

Human Rights do not come through begging, but struggling, even with our sacrifice.

Boycott the Summer Olympic in Peking!