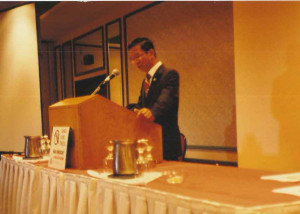 I am very glad to have this opportunity to speak to the outstanding officers from Police Departments of the State of Texas. Vietnamese culture is a broad subject that cannot be discussed within a limited time, so I will try to focus some important points that you are concerned about while dealing with the Vietnamese youth gangs.

My name is Michael Do. I graduated from the Polwar College and served ten years in the Republic of Vietnam Army as an infantry company commander and in the Air Force as Political Indoctrination officer. Right after the fall of Saigon to North Vietnamese Communists, like other hundreds of thousands of South Vietnamese officers, I was imprisoned in the so-called re-education camp from 1975 to 1985. Surviving after years of hard labor, torture, and persecution, I came back home to see the great changes of the society. The changes in every aspect uprooted all traditional values and morality. While the elders were struggling to live an animal level life, the young people wandered without having orientation for the future. Thanks to the persistent efforts of the U.S. government in negotiating with the Vietcong, we were permitted to leave Vietnam for America to begin our new life in freedom. I have been settling here for more than four years, and have been elected president of the Vietnamese Veterans Association since 1992.

There are about fifteen thousand Vietnamese people living in Austin and its vicinity. Such large number creates a growing community, which has noticeable contribution to our social, political and economical progresses. The great majority of the Vietnamese residents are peace loving and hardworking. The ratio of young Viet involving in criminal activities is very low. Indeed, they are likely victimized by Viet gangs from other cities or by gangs of other racial groups.

About four thousand years ago, a fraction of a hundred Viet tribes in South China migrated to the Hong Ha (Red river) delta to create a new kingdom Au Lac. They also established new social order and culture separating from the Chinese tradition. Our ancestors had to struggle against both the Chinese invasion and harsh conditions to survive. We suffered nearly one thousand years under Chinese domination and eighty years under French, but we still maintain our independence, culture and language. We all are proud of many brilliant victories over the great Chinese armies of the Sung dynasty (11th century), Mongolian dynasty (13th century), Ming dynasty (16th century) and Manchurian dynasty (18th century).

The Vietnamese culture is a diversity of the Chinese and Indian civilizations. We learned from Chinese social and political structure as well as the morality concepts of Confucianism. We accepted Buddhism from North India as our greatest religion. The combination of Confucianism, Taoism, and Buddhism plus our traditional morality formed a leading social psychology and made our people different to other neighboring peoples.

The Vietnamese people pay respect to the authorities and obey the law. They consider the state affairs are vested into the hands of elite. Changes in political concepts only happened when the French invaded and occupied Vietnam in 1884. South Vietnam became French colony whereas the central was still ruled by the king, and the North was under the dual authorities of the Viet emperor and French protection. French domination ended in 1954. We had just started building our democracy of western type with the help of the United States and the free world bloc, then the war blasted out between North Communists and South Nationalists. The long lasting and bloody war caused a critical change of our social values. The faith and morality were challenged. In North Vietnam, Ho Chi Minh established a Stalinist type of Communist dictatorship, peeling off all human rights and forced their people into a fierce war machine against South Vietnam. In the South, happiness and peaceful time did not last long as the coup d’etat that killed the late President Diem led to a military dictatorship. From then on, the ruling class backed by the US committed to corruption and was no more trusted by the people.

As a result of misunderstanding Vietnam War from the American public, the US government couldn’t win the support from its people; and was forced to withdraw from Vietnam. Without the military assistance, Saigon fell into Communism in 1975.

I’d like to remind a bit of Vietnam history since 1954. After defeating the French, the communists took power over North Vietnam; they established an absolute dictatorship to convert the traditional society into Communism where the people became production tools of the Party. The land reform program killed hundreds of thousands of landlords; the ownership was destroyed, the whole economy, education, and production systems are under the control of the party. All tradition values were up side down; the communists even keep their tight control over familial relationships. All religions were eliminated; churches and temples were occupied and used as offices or military garrison spots.

The same things were repeated in South Vietnam after 1975. Two hundred thousand South Vietnamese officers were put in prisons for five, ten years or even longer due to their positions in the Armed Forces; and so were Buddhist monks, Catholic priests and wealthy people. Other hundreds of thousands of people were forced to move out of the cities to some remote areas in highland to build the so-called New Economic village. Life becomes horrible because they don’t know what might happen to them and their families tomorrow. Their properties, their children, even their lives can be taken any time; and they have no way to protect themselves. A new class of high Communist party members begins to form with high privilege and interests.

The first Exodus wave began in April 1975. More than one hundred thousand Vietnamese began fleeing the country to seek for freedom. Of them, the majority was civilian and servicemen of the Republic government and people of upper and middle classes. They were well educated, and had sufficient background and experience. Once in the United States, they rapidly adapted to new life and built their fortune rather stable. Their children became a part of talented class in our American society.

From 1976 to 1990, half million of Vietnamese people risked their life to escape from Vietnam on small boats or through the jungles. Some reached to new shore; some are still in refugee camps in several Asian countries; others robbed, killed, and raped by pirates. The majority of people in Asian refugee camps would probably be sent back to Vietnam because they are not considered political refugees.

This second wave of migration consists of low class Vietnamese. They lack of education, background and technical work experience to be employed in an industrialized country. They have not adjusted easily and had to accept hard work with low pay in order to survive. They are not bad people, but they simply have to work hard and cannot take care of their children as they wish. The psychological burden was so serious, having great impact on their lives for years. A very small part of young people of this group has no orientation. They had problems in school. Some dropped school and committed to crimes. Young Vietnamese are likely not to involve in major crimes such as murder, rape and bank robbery. They usually aim at Vietnamese family rather than other racial parts.

From 1990, tens of thousands of former South Vietnamese officers and their families have been admitted to the U.S.A under the Humanitarian Order program. This new wave formed a special group of Vietnamese who are totally different to other former groups. They are likely to have same level of middle class social background, and they all had suffered long years in communist prisons and had been persecuted after being released from prisons. They are less lucky in this country, because they are rather old (the youngest must be above 45); long prison term took from them their health; some of them suffered family broken and separation. They are trying their best to bring up their children to become good and valuable citizens of our country.

As said above, the Vietnamese people rarely pay attention to state affairs. Their goal is to work to earn money, study to improve their knowledge and career, and enjoy their life with family and close friends. It’s hard to ask them get involved in community activity too. Most of them do not understand the law and are not able to discuss on those complicated subjects.

We are trying to persuade them that political activities are both their privilege and obligation to protect their interests. Vietnamese people do not want to have problems dealing with the authorities. Once something happens, they try to solve peacefully and do not want the public to know or interfere. In public, they hardly speak out things that might cause anger or unpleasant atmosphere to others. They try to agree on most subjects. They also do not want to lose face or loudly argue in public.

Vietnamese respect older people with humble attitude. They trust in monks and priests; and ask for advice from the elders or higher educated persons. They believe the law of Cause and Affect: good men must be rewarded and the bad must be punished. They are willing to help and show their deep sympathy to those who are unhappy. Vietnamese young people avoid looking at the face of elder while talking with them. Touching opposite sex in public is shameful and unacceptable in certain cases.

Very few Vietnamese use drugs, but many are likely to love drinking and gambling. On weekends, they like to get together to drink and talk for hours; but they can control their drinking not to be drunk and to do wrong things.  Gambling like cards, mahjong, and dice rolling is popular in some families and in some social gathering.

One major problem we are concerned about is the Communist effort to influence the community. Communist spies disguise themselves and penetrate into several areas of our community activities. We do consider some types of crimes have been conducted by those people as to weaken our community integration. As we have learned, all communist countries commit to drug dealing and terrorism.

Getting to know each other better is our ultimate goal. I’m urging you to learn and accept the diversity of culture of other peoples; and on the other hand, have a proper way to communicate and educate people, help them become more familiar to the American way of life while respecting their tradition.

Thank you all so much for your time. The next thirty minutes is for question and answer for what I might not have made clear in the speech or what you may want to know further.

Have a good day.